Week 20 of my comfort zone challenge – The Sussex Cricket in the Community Disability Day. A day designed get disabled groups, whether it be mentally, physically or emotionally, active and having fun, through the use of cricket. Disabled groups are invited from all over Sussex, to the home of Sussex Cricket, the BrightonandHoveJobs.com County Ground, to partake in many activities from throwing, batting, bowling, table cricket, deaf cricket and much more.

I volunteered to help out at the disability day, having shamefully, never done anything like this before. My role was to run one of the stations of activities. I was given the inflatable target throw… They simply throw the ball through the target, making it harder each time. 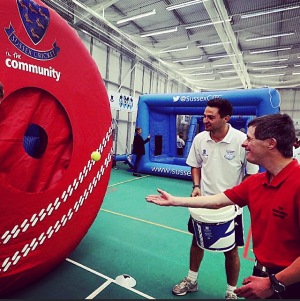 One of the full time coaches, before the event had started, gave me the advice “Just make sure you are enthusiastic” which turned out to be pretty good advice. Groups aged from young school children about 8 to 80 year olds. The reactions as I ran my station from each and every person varied, all making me smile in a different way, but three people in particular are worth mentioning:

Chaz – A young 11 year old child, in an electric wheel chair. Chaz instantly asked my name, and wanted to keep a tally of everyone’s score to see if they would beat his score of 5. Rather than wanting to win though, he was encouraging all the others in his group to beat him. Which I thought was really refreshing in what seems to be an ultra competitive world we live in! Chaz became my mate over the day, he supports Arsenal and his favourite player was Theo Walcott, he even taught me a new handshake/fist pump combination. To say goodbye, he said “If I don’t see you before, have a great half term”. What a nice kid. 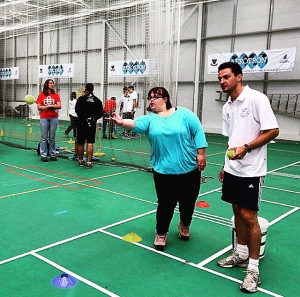 Andrew – After being the best in his group at my target throw, he wanted to go even further back to see how far he would go. This sparked a competition with him and one of our coaches from across the other side of the hall. After a few attempts, Andrew managed to win this competition, and as it went into the hole, he ran at my full pace and gave me the biggest of high ten’s as we both celebrated like he had won the world cup. He could hardly contain his excitement as he kept walking around with a smile on his face, and occasionally high five-ing me again!

Chloe – Chloe, was a women with Downs Syndrome, who managed to throw it in the target from the hardest cone, despite her saying she’d never do it. After she did it, I gave her a big high five and told her that was brilliant. She then proceeded to blush and told me I was gorgeous. To my dismay, I found out later in the day, she had already asked out one of the coaches on a date three times! 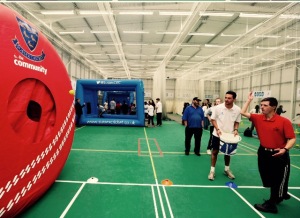 There were plenty more stories, and plenty more characters. All the cliches came through, this really did remind me of how lucky I am and it really was rewarding. Selfishly, making these guys days was making my own. Furthermore, the bonds some of these people had with their carers was really heart warming, and did restore a lot of my faith in humanity. I felt extremely glad I had helped out in this event, and despite rain scares, it was a brilliantly organised event. I just felt bad that I hadn’t ever helped out in anything like this before! I’d strongly recommend this if you haven’t done anything like this before. 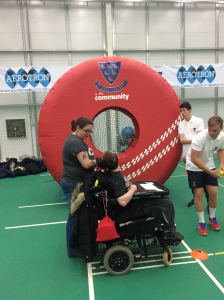 It just highlights some worlds that I’ve barely even considered over the years, and there are plenty of ways to help people on a small scale, this being an example of one. I’ll finish this post from a good quote from Winston Churchill “We making a living in life by what we get. We make a life by what we give”. A good one to live by I recon.

P.S If you want to see a high ten fail.. watch the Meridian news piece 28 seconds in! http://www.itv.com/news/meridian/update/2015-05-18/cricket-club-opens-its-practice-nets-to-the-disabled/