It’s safe to say, I’m not a fan of bees despite the fact I’m told they’re friendly. I hate wasps, bees and hornets. In fact, I can’t really think of any insect that I like. I’d be terrible on I’m a celebrity get me out of here.

It was only when my next door neighbour bees decided to swarm into our back garden a few weeks ago, and he came and retrieved them, that I thought what a good idea for a challenge. Obviously, as a bee keeper, my neighbour Richard doesn’t want to disturb the bees too often, so timing of this challenge was the key. 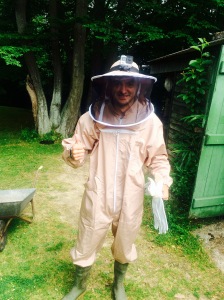 Richard showed me all the equipment:
The Suit – Protection against the angry bees
Wellies – stop angry bees from crawling up your legs
The smoker – to make angry bees, less angry

Though I’m still not 100% of the process how they make honey… I believe this is how the process goes. The bees collect pollen and nectar and carry it to the beehive. The nectar mixes with the bee’s proteins and converts into honey. They drop of this honey in to a hexagonal comb produced by the bee and repeat until the combs are complete. The bees then cap the honeycomb with wax and move onto an empty cone. It’s all pretty clever stuff from the bees. Richard was telling me, that they are extremely clever creatures, their sense of smell is incredible. They’ll know a bee from their swarm, and any intruder immediately. If you aren’t part of their swarm, you’re out.

It’s safe to say, they are protective of their queen. Once we had woken them up, they had no quarms in headbutting Richard and myself constantly. Quite admirable really. The queen spends all of her time in the brood chamber, protected by her group of workers whilst she lays 3,000 odd eggs a day. Amazing, how colonies of insects work really. Workers have one goal, get the pollen in.

There wasn’t enough honey to take any of this time, however, Richard has promised I can come back to see the final product when it’s done.

The suit was the key for making all this happen, I would have been squirming all over the place without it. It was a fascinating experience, certainly learnt a few things, and Richard was brilliant in teaching me what was going on, despite being a terrible student. My fear of insects still exists despite my fascination in how they live.

A quick video of the bees attacking…

One thought on “Week 26 – Beekeeping”