Back to my two left feet we go. Not happy that I’d given dancing a good enough crack, the finance team at work urged me to go Cuban Salsa dancing on the hope they could save my dancing hopes.

I have to say, what great fun this was. I was surprised at just how many people turned up. At a guess, around 50 people turned up, all around my age?! It was quite unbelievable.

What wasn’t unbelievable was just how bad I am at dancing. We started off with a big warm up where we would move side to side to a beat, with the occasional spin, jazz hands, etc. At this point I thought, I can dance! I was giving it a bit of Carlton from the Fresh Prince of Belair at this point. This the kind of dancing, I normally do in the mirror.

Then we split into groups based on Salsa dancing experience. I went in the beginners group, where I got the timely reminder. I CANNOT DANCE. I don’t know what it is, but I just have no dancing ability what so ever. However, the environment being so relaxed and the music made this quite fun. Messing up became hilarious. 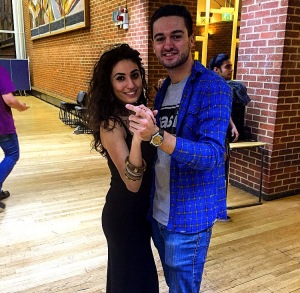 As there was one more male in the group, there would be a point where I would be dancing with the air pretending my partner was there. Good comedy value at least. I probably messed up with every partner.. but by the end of it, dare I say it, I was getting the hang of it.

I’d look around the room at the more advanced groups and some of the stuff they were doing was unbelievable. Who knows, maybe I could actually one day get rid of my two left feet!