Being Halloween week, it my flat mates felt it would be appropriate for me to watch the WORST horror film going.

I hate horror films as it goes, I just don’t understand them. Why would you choose to watch something that scares the life out of you. Also, what sick maniacs think up this stuff?!

The film in question, well this is something else. I’ve seen a few horrors, but they all look like comedies compared to this. A Serbian Film. A simple title that doesn’t give much away, and believe me you don’t want to know.

The Independent describe A Serbian Film as the “nastiest film ever made” and I really struggle to disagree with it. It’s certainly the nastiest film I’ve ever seen, and imagine I will ever see.

This isn’t the place to discuss the plot… If you want to know what happens google it. Whatever you do, don’t make the same mistake that I did, and watch it. The film is banned in 9 countries across the world, and for good reason. It is sick. What I have seen, I cannot un-see. Take my word for it, and don’t watch it.

Below is a gogglebox style video of us watching A Serbian Film… worth watching to the end. Happy Halloween!

Week 39 took me into the cruel world of dating, once again. Having already taken part in a blind date, I haven’t really wanted to delve into the dating world for challenges. But alas, I’m running out of things to do from the list, and speed dating was the challenge.

I went into this challenge, with a sense of arrogance. You know the “I’m a bit better than this” type of feeling. My perception was always about a sense of desperation around speed dating. I guess both of these kind of changed over the night. Let me explain…

The night started with a couple of drinks in the pub next door to settle the nerves (have you worked out a theme for when I’m nervous yet?). Once we finally stumped up the balls, myself, my housemate, Marc, and my work colleague, Steve, all entered the speed dating room, where we were handed a sheet of paper, a pen, a name badge and a number.

The rules are simple. 4 minutes. Have a chat. Rate either Date, Mate or No. On to the next one.

The ‘women’ came from all parts of the world, Mexico, Germany, Australia, England. No one really took my fancy, but it’s hard not to try and impress in the scenario. The main issue I had, was that due to the ordering, both Marc and Steve had already told the females everything about me. “Are you Tom, that writes the blog?” I’d normally be greeted with.

There were some characters, when I put ‘women’ in inverted brackets, that’s because I’m almost certain one wasn’t a woman. Despite the fact she/he was insistent on telling me she was during my four minutes. Never thought I’d date a transexual in my life, I must admit.

The event was all done and dusted and it was time to rate everyone. This is where the evening took a real downfall personally after this. Having a drink at the bar, the three of us asked four of the girls from the speed dating to honestly tell us what they put for matching. Their answers were as followed:

This followed by a procession of “I’m Fine!” in Ross Gellar style by myself. I was gutted, and my arrogance from the beginning of the evening was quickly shot to pieces. The girls told me it was because “my heart wasn’t in it”… It probably wasn’t but still. OUCH.

All this aside… My review on speed dating. Not for me. I struggle to believe anyone in this world would find romance from speed dating. It’s such a forced, un-natural process, filled with no time to actually chat to people. There is a clear feeling that people are rating you from as soon as you walk into the room, something that is not enjoyable. It was a laugh with my mates, but I can’t imagine I’d see myself doing this again. Were people in the room desperate? Maybe not as I imagined… I don’t really think anyone saw themselves getting much out of it.. But maybe that’s because my heart was never in it (Yeah – still fuming).

This week I took on the task of being Quiz Master for Little Common Ramblers Cricket Club.

This involved writing the quiz, all the way to delivering the quiz on the night. In true Tom Rose fashion, I left writing the quiz until the afternoon of the event, which did not give me much time to prepare. Thanks to my good friend Google and a little bit of help from colleagues I managed to put together a quiz of 7 rounds.

Throughout this part the rounds consisted of three main rules:
– A couple of easy questions (to keep people interested)
– A few hard questions
– A question that I would find funny
– All questions easy pronounceable for myself – I’m not embarrassing myself trying to prounouce anemone (Uh-nem-uh-nee) or anything similar

Quiz prepared, it is time for the quiz itself. Having spent half an hour trying to make the speakers work, whilst hiding the quiz from contestants. I found myself running a bit late. Fortunately, I wasn’t responsible for any of the other parts of the quiz, I would have forgotten pens for a start!

It’s safe to say the power of being a quiz master went to my head. The two rules of the quiz were no cheating, and the quiz masters word is final. This is all well and good to begin with, but after my beer a round, to settle the nerves, my decisions became ropey as the night went on.

I didn’t do too bad I don’t think… Once the alcohol had settled and the nerves had gone. I soon started to enjoy the role. People really get into a quiz! Most importantly it helped raise hundreds of pounds for the local cricket club, close to my heart. Up the Ramblers!

At the age of 24, you could probably say this was weeks challenge (though probably more than a week) was way overdue.

This week, the time came to leave home and move out. Though I have moved out for the university years, moving out post university, is the real moving out for good. I finally found myself in a financial position to be able to pay some rent and move closer to work.

My move sees me move from Hastings to Brighton (Hove actually). The main reason for the change of location was to be closer to work. I swapped an hour and a half car journey to a two minute walk in the mornings. I mean it doesn’t get much better than what I’ve got now. I now live walking distance from work, in a city that has far much more going on than the Hastings.

That said, leaving Hastings is no easy task. Anyone outside of Hastings, will slate the place, but I will not let anyone but myself say a bad word on Hastings. 24 years of growing up in Hastings and loved the place. Okay, I’m only an hour away from Hastings if needed, but a part of me will really miss the place.

The move itself was a bit of a pain, mainly fitting all my clothes into my car. Who knew I had so much stuff? It’s taken a while to sort out my room how I like it, and not sure it’s there yet but time will tell. Living in the countryside and moving to the city, I will have to get used to shutting the curtains after getting out of the shower. Given a few surprises to a couple of pedestrians already!

The move is the start of the next chapter in my life I guess, having lived in Brighton two weeks at the time of writing this… I can safely say I’m going to enjoy it here. My liver might not, but my mind will.

Shout out to my parents for putting up with my for the last 24 years, no easy task. Shout out to Carl and Marc who will have the unfortunate task of having to live with me for the foreseeable future. I wish you all the luck in the world, you’ll need it.

Dubbed the happiest 5k in the world, my first day living in Brighton, involved being covered in paint and dancing until the sunset.

There are only two rules for this event, dress in white and have fun. It’s pretty much impossible not to abide by these rules, as they atmosphere kind of takes over. Running with my new flatmates, we turned up in our white kit and ended up as multicoloured messes. In hindsight, I wish I wore running trainers instead of vans, but myself and my ankles managed to get through. In more hindsight, I wish I didn’t chuck my plain white tee in the wash with the paint covered t-shirt. Pink T-shirt anyone? 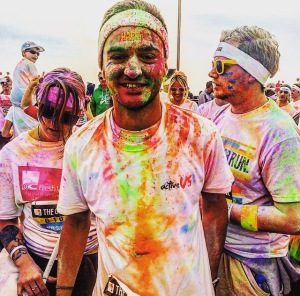 The colour run is an event I hadn’t even heard of before doing it, but I must say, there is something about getting covered in paint that makes you lose all care in the world. Even if you can’t see or breath for the first few seconds after getting caked in paint. It’s not hard to see why they dub this the happiest 5k in the world.

The event was a timely reminder, however, of how unfit I am ,as I struggled through 5km in 29 minutes. It’s things like this though, that encourage participation from all walks and ages, that will get people active. Plus who doesn’t want a paint party to end?! I’d have probably been sitting on the sofa had I not being doing this. 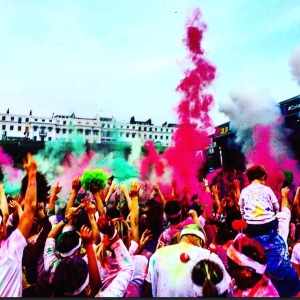 On the back of the colour run, and volunteering for the Brighton Marathon, I have entered myself into the 2016 Brighton Marathon. Ambitious I know after only just completing 5km. Oh well, wish me luck.