This week for my comfort zone challenge, I gave up my social media accounts, handing over all my passwords and what at the time felt like my life. I said goodbye to my Facebook, Twitter and Instagram accounts as my good friend, Jake, changed my passwords.

Did you know the average smartphone user looks at their phone 1500 times a week? That’s roughly 215 times a day. I know I’m certainly guilty of this, and 200 times a day cant be far off how many times I look at my phone. The majority of which is probably to look at social media.

This was a weird kind of detox this challenge. The first few days were hard. I felt pathetic. I honestly couldn’t remember what I did half the time before social media existed. I felt almost lonely without my 700 Facebook friends, 500 Twitter followers and 200 Instagram followers. Without my virtual friends around me I felt detached from the world. How sad!

I work in marketing, and in turn, social media has become a big part of my work life also… It’s amazing the power of social media these days. Everything is instant at the touch of your fingers… . People are so time poor, rather than writing a letter of complaint, they will tweet a complaint, and usually get a hell of a quicker response. It’s meant that twitter has become a place to air opinions with ease, which in turn, makes it fairly entertaining just to scroll through. Social media is now the place to share everything, your complaint, the constant selfies, the team before a night out pics, the public break ups, celebrity trolling, the healthy dinner pictures, the unhealthy fast food pics, the cheeky Nando’s post, the “oh my god I can’t sleep post”, the wow I’m so tired this morning post, the screw Mondays posts, the TGIF posts, the holiday posts, the song lyric posts, the motivational quotes post (guilty), #gains with the protein shake! These can certainly wind me up, but it’s all part of what makes me love social media.

So for the first few days, without all this garbish to read, I was at a loose end in my spare time. By habit, I would keep trying to open the apps, only to greeted with the password screen. At first, other apps, Sky Sports worked overtime, but over the week my iPhone started becoming slightly less needed in my life. Pretty much all my apps don’t work without my Facebook login, including Spotify, meaning I had no access to my daily Oasis/Noel Gallagher.

I started to watch TV again, which I never do anymore. Child Genius on Tuesday was a highlight of my week. I also began reading my colleague’s, Tony Cottey, autobiography which has been a very funny read so far. For me, reading a book is a somewhat a revelation. I did some overtime playing the guitar. Generally, I stopped wasting time refreshing my feeds. There were times on the way I wanted social media bad, or felt the need to post something. I kept a list of things I wanted to do on social media on the way:

Monday
– INSTAGRAM Follow Noel Gallagher on Instagram, having heard an interview of his, and realising he’s actually on there. (still yet to have done this, a good reminder for myself)
Tuesday
– TWITTER Congratulate Michael Yardy of Sussex Cricket on a great career (zzz cricket)
– TWITTER Tweet there should be a programme on Giovani’s Dad #childgenius (what a programme)
Wednesday
– TWITTER Question modern music after listening to a song called ‘Peanut butter jelly’ on Radio 1 (Give me back my spotify PLEASE)
– TWITTER Question being an old man because of the above, and wondering if I’m now a Radio 2 listener.
Thursday
-Nothing?! (Was I starting to Detox?!)
Friday
– TWITTER Congratulate Sussex CCC getting into the Quarter Finals (^No. zzzzz cricket)
Saturday
– TWITTER Lose it at my cricket team winning (honestly, get a life, Tom)
– TWITTER Drunk tweets (no doubt)
Sunday
– FACEBOOK/INSTAGRAM – Hungover viewing of people/my pictures.

Reading that back… Why do I share this with the world? Who cares? It’s a strange world, the social media world.

Not for a minute would I ever want to give up social media, I think it’s pretty amazing at times. However, I do need to stop wasting time on it so much and really think about what I post. This challenge certainly reminded me off that…

Maybe I’ll set a reminder to read this back in a few months time, when I’m back into the routine of tweeting rubbish and spending my whole day refreshing my social media feeds…

A relatively simple comfort zone challenge this week in the grand scheme of things. Simply go and buy a copy of the big issue.

I’m ashamed to say that I was completely unaware that The Big Issue magazine is an initiative to get to support homeless people. The idea is that the magazine vendors have to be homeless and they sell them to help get back on track. How could I not know that? I’ve actually ignored hundreds of people selling them in the past, and in reality this is a brilliant idea.

I walked past a seller in Hove. He was leaning on a lamppost, with his dog by his side, and the rest of his magazine under a shelter. So used to being ignored, he barely even asked me if I wanted a magazine. I approached him and asked “how much for one?”.. he quickly replied “Just £2.50, sir”. As I rummaged around my wallet and started dusting of the cobwebs in the note section. He asked “How’s your day going?”… I explained how I was on my lunch break and just taking a stroll into town. I was hesitant to ask him how his day was in return, I didn’t want to make him feel bad in anyway, but it felt like it was the best way of keeping conversation with him. “It’s been a slow morning, me and Sadie (pointing to his dog) aren’t selling that well, you’re our fifth or sixth customer. Hopefully things will pick up this afternoon, now the sun is out.” Sadie looked like a golden retriever type dog. Handing over a fiver, I claimed I only had a fiver and he could keep the change, and asked if I could give Sadie a stroke. “Of course, she loves the attention. Don’t worry, I’ve got some change… I don’t want you missing out on lunch.” I then proceeded to give Sadie a little stroke, whilst talking in a ridiculous high pitched voice, like I do with dogs. He gave me the change, wished me a good day, and I went on my way.

What a pleasant experience. I didn’t catch his name, but what a top bloke. I know there are stories where Big Issue sellers try to have people on, but this guy was a genuinely pleasant man. What he does with the money, that’s not for me to say or judge. At least he is trying to earn his way, so fair play to him.

I’ve had a little read of The Big Issue magazine, not a bad read. Kept me entertained over my lunch, and certainly worth paying £2.50 for, even to help someone out.

Week 27 of my comfort zone challenge. This week I took part in the Sussex Pink Day at work, where we all invited to wear pink for the day in dedication to The Lily Foundation.

As these are getting harder and harder to organise, any opportunity to get one in alongside work, I will snap up! This was the case this week.

We at work invited everyone to wear pink for the day, and evening alongside our NatWest T20 Blast match where the fans were also invited. It’s something that every one really got behind and made for the wearing of pink slightly more comfortable. Let’s be honest, we all want to wear pink every now and then! 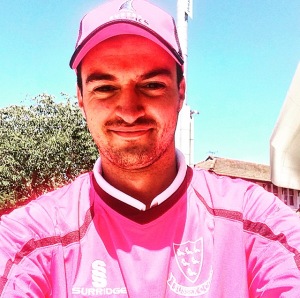 The inspiration for the event was Jessica Newell, who suffers from Mitochondria Disease (which I still struggle to say). Mitochondria are in nearly every cell in our bodies and they provide us with the energy we need to function. When someone has Mitochondrial Disease their mitochondrial don’t work properly which leads to organ failure and is ultimately fatal. Mitochondrial Disease claims more lives than all childhood cancers combined and there are still no effective treatments and no cure. Below is a video that explains the disease better than I can.

Jessica’s dad, Keith, played for both Sussex and Glamorgan as a cricketers, so approached Sussex to do this day, when the two clubs played each other. Jessica was the mascot, and when her, Keith and Victoria (her mother), I really could only feel sad. Jessica is right up there with the cutest babies I’ve ever seen. 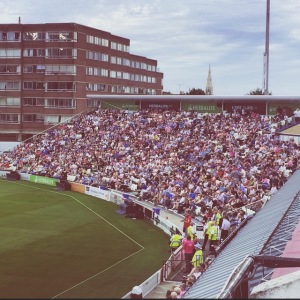 The day was brilliant, and raising awareness of this disease was key. People bought into the event, and hopefully the charity raised a bit of money. Everyone wearing pink seemed to brighten up spirits around the ground, and really made for a fantastic atmosphere. One of the best I’ve ever been part of.  I met a few people unaware in the day who gave a few “nice shirt” remarks, but apart from that, it was great day.

What it did make me think is how cruel life can be at times. It’s just so sad that this happens to people and their family. Having spoken to the people at the charity, I’m hoping to do couple of events to help raise them some money, tough mudder was mentioned, which sounds suitably horrendous for me too do.